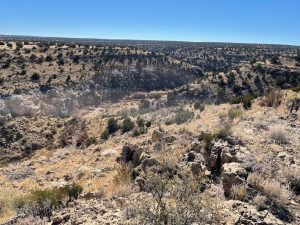 Wind is one of the worst four letter words I can think of when it comes to hunting predators.

Now, don’t get me wrong, I like a steady hint of wind, 4-5 mph, but once it becomes more than 10, I dread going out in it.  15mph is the top of my limit.  I know there are guys out there who do well in it and actually thrive.

Here’s an excerpt from Grand View Outdoors on coyote behavior with the wind and why some guys do well in it:

For starters, it’s extremely important to understand how coyotes deal with high winds. For clarification, we’ll consider anything over 20 mph high. Believe it or not, coyotes are not magical creatures that vanish from the face of the earth when tumbleweeds start rolling across the pasture! First and foremost, they will always be opportunistic omnivores.

When presented with the right temptation, they’ll respond, whether the winds are strong or not. During windy conditions, a coyote’s comfort zone or how far they are willing to respond to the call is contracted. For example, a coyote might be able to hear your call from 600 yards away, but its comfort zone for responding might only be 300 yards. Thus, the coyote will stay bedded.

As the wind increases, coyotes move into rougher terrain and/or thicker cover to escape the wind’s brutality. The upwind side of canyons, draws and washes, as well as overgrown tree rows and drainage bottoms that contain the thickest vegetation, are all examples of terrain coyotes retreat to. Across terrain that is consistently the same, it might be difficult to distinguish these bedding areas from any other part of the countryside.

Keep in mind that a bedded coyote sticks up no more than 12 inches, so it doesn’t take much cover to provide a wind break. Subtle deviations in the landscape or pockets of vegetation that might be thicker than the rest provide just enough cover. In many cases, higher winds are associated with the middle part of the day. Coyotes are already transitioning to their bedding areas during this time, so in many cases, the wind doesn’t necessarily change their routine. It might, however, send them to cover earlier and hold them there later.

Coyotes have phenomenal hearing, and most hunters underestimate just how far a coyote can hear in the wind. Coyotes have an upper frequency limit of hearing of 80 kHz. Domestic dogs are somewhere in the ballpark of 60, and depending on how religiously you’ve used earplugs over the years, you’re somewhere around 20. Simply put, coyotes hear four times better than us!

What do you think?  Going in the thicker vegetation, deep canyons, ravines is a great way to still be out hunting with high winds.  Try it next time the wind is blowing and see how you do.