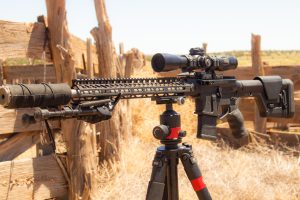 Length:  Does it really matter?  Sure it does, when it comes to velocity, but not accuracy.  Remember, velocity does not equal accuracy.

The myth is the longer the barrel the more accurate the gun is!  This is far from the truth.   You will lose some velocity shooting with a shorter barrel, but the shorter barrel will dispatch game as affectively as the longer barrel. That is if  you have the appropriate energy  to harvest that particular game.

Lets take a 6.5 Grendel for instance. When fired across a magnetospeed chronograph we were finding that a 20″ barrel with factory Hornady 123gr SST’s will reach speeds around 2510fps and a 18″ barrel with the exact same ammunition will only reach roughly 2430fps.  When taking a longer shot, lets say 500 yards, you will need to account for bullet drop due to the loss of velocity . That can be done using holdovers or by dialing your scope.

Advantages for a shorter barrel are:  Lighter rifle, easier to maneuver with suppressor, less top heavy, easier to store.

Disadvantages for a shorter barrel are:  Velocity, energy at further distances.

Especially for hunting applications such as predator hunting, where our average shots are between 100 and 200 yards, with an occasional shot out to 400yds,  the energy produced by most cartridges is well within the shorter barrels effective energy.