Carbon fiber barrels aren’t new to the AR world, but they sure have become more and more popular over the last couple of years.  There are companies who roll wrap them, companies who wrap them by hand over a lathe without any thought on angles, using sleeves to put over the stainless barrel and other companies using machines to do as many as they can in a day. 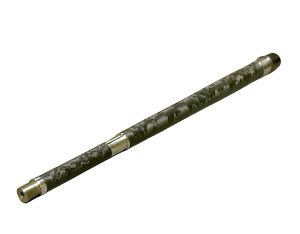 We bought a cnc machine, where we can control the speed, the angle, thickness and desired finish.  The barrels that are done in house, get wrapped, cured, profiled, inspected for voids, then polished by hand up to 2000grit sandpaper.

One of the greatest advantages of carbon fiber barrels is the high level of rigidity that they provide.  This helps with the accuracy, whereas the barrel doesn’t whip(flex) quite as much due to this huge benefit.   You thought I was gonna say weight, didn’t you?  That is an obvious benefit too. In a large frame(AR10 type) a 20″ barrel wrapped with carbon saves exactly one pound over the standard stainless steel barrel of the same length.

There are also some downsides to the carbon fiber barrels.  Cost is the biggest concern.  Carbon, also isn’t cheap, neither is the labor.  Each barrel takes approximately 8 hours to make.  Another downside is how quick it heats up.  Long strings of fire can be detrimental to your accuracy, but it cools a lot quicker. In a hunting scenario, this shouldn’t be a concern though.

As a rifle company, we didn’t want to sell parts and pieces, but when we start showing off our carbon fiber barrels on builds, we kept getting emails, pm’s and phone calls asking for just a barrel.  The decision was easy to open a second company.  This is where Spade Composites comes in.  We sell just carbon barrels and the immediate items that are associated with the barrel, such as gas tube, gas block and thread protector.

For more information or to order a carbon barrel for your AR, please visit Spade Composites.