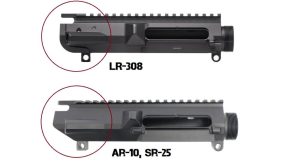 We recently had a friend ask if we could re-barrel his Armalite AR10 with one of our carbon fiber barrels.

Our barrels are patterned off of the DPMS LR308 platform, like most other companies out there.  I had him order his favorite caliber and a few other parts and had him bring it in to the shop.

The biggest visual difference is the Armalite AR10 has an angular cut on the upper/lower right before the buffer tube housing, where the LR308’s is rounded.  The differences don’t stop there.

Here’s a list of parts that aren’t compatible between the two:

With that being said, if you only want to re-barrel your Armalite AR10, to a DPMS patterned barrel, you must change out the barrel, bolt and gas tube for it to work properly.

A carbon barrel was a great choice for my friend and he saved over a pound on the carbon barrel swap.  We swapped the barrel, the bolt and a new gas tube. He’s now shooting a lighter gun and his caliber of choice.