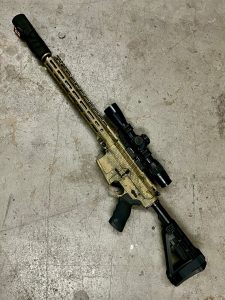 Earlier this year, we started designing an AR pistol for our clients, the predator hunter.  One that is effective and still accurate.  Our 14.5″ 6.5 Creedmoor was the first created.  I took it to Montana and tested it on coyotes and a couple of racoons.  The shorty with a stabilizer brace was immediately a hit with those who got to shoot it.  It was light, balanced perfectly and with the suppressor, nice and quiet.

Lets explain what an AR pistol is before we go any further.  Per ATF website:

The term “Pistol” means a weapon originally designed, made, and intended to fire a projectile (bullet) from one or more barrels when held in one hand, and having:

Before we could release it to the public and offer it as a production piece, we got a email from the ATF, talking about possibly banning stabalizing braces.  There is no current ban of these, but the ATF took public comment and got almost 211,000 comments on this topic, which I beleive they have to reply to all of them.

As of right now, the ATF says a final ruling on the legalization of the pistol brace will come around Dec. 2022.  IF this becomes policy(they can’t make laws) we will have 90 days to obide by this ruling.  This will be around April 2023.

There is an estimated 25 million AR pistols in the country, imagine if everyone had to pay a $200 tax stamp to make them into legal SBR(short barreled rifles).  Do the math! Thats $5 Billion dollars to the government.

I’m no legal scholar, but this isn’t going away.  If you enjoy the shorter barrels, the AR pistols, now is the time go get one.  I feel like the pistol braces will be banned and several companies go out of business or have to deviate their business to conform to this ruling.