If you pay attention to some of the Facebook groups, you have probably seen the debate on the 243 vs 6 Creedmoor, again!  Some of the guys argue for one or the other without doing testing or have never shot the other they are so adamant about.

Both have merit and both are great for killing coyotes, we’re not here to debate which is better.

We made two 20′ 6mm Creedmoor Khaos rifles with the 1-10 twist and they were suppose to have a short chamber.  Once they arrived after many weeks, I measured the chamber(after they were carbon wrapped) and noticed it was a SAAMI spec chamber.  I wasn’t the happiest of people, but mistakes happen.

The vendor offered to take the barrels back, but I wanted to try to see what these barrels would do with the lighter bullets.  I don’t think accuracy comes from how close you are to the lands(rifling) .  There has been numerous test showing this is to be fact.  Too many guys coming from the bolt gun side of things are set in there ways and want to be .010-.020 off the lands.  Not saying its wrong, but in an AR platform, its harder to do that and this test today shows how untrue this really is.   Consistency with neck tension, bullet depth and your chamber being straight(to include barrel to bolt fit)

Two weeks ago, I loaded 55/58/60/70 grain bullets and used the wrong powder, Varget.  Then last week, i couldn’t get a better group than 2.5″,  I was starting to doubt my theory on this short chamber or thought my reloading was bad.  Well, it turned out the scope I had on top was bad,  wouldn’t hold zero and jumped around with every shot.

I bought a Eotech Vudu from a friend and mounted it in Mitchells(my employee) Spuhr mount, loaded some 58/62/70 grain bullets quickly and ran to the range.

These groups were all about 1/2 MOA at 100yds with no load development.  87Gr Factory ammo did the best, but with some development, I think we can get even smaller groups.

These speeds are on the low end, I’d like to see them at higher speeds to see if we could maintain 1/2 moa or better, I beleive we can.

Give us a call, if you’d like to order a 6mm Creedmoor barrel or a complete rifle. 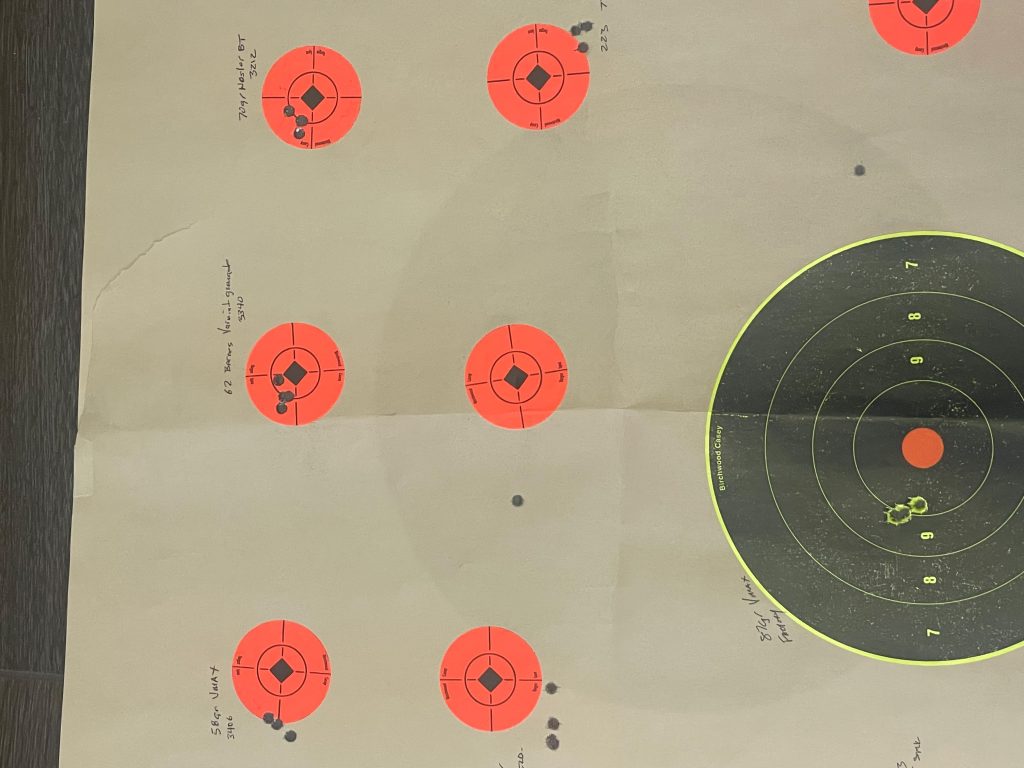